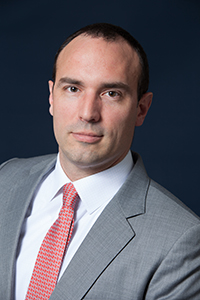 Mr. Wright was born in Los Angeles, California. He is a civil litigator who focuses on representing CPAs, Fiduciaries, Directors and Officers and other professionals in litigation and regulatory matters. Mr. Wright also represents Creditors in post-judgment enforcement. Mr. Wright has achieved first-chair success in civil trial, arbitration and the Court of Appeal. While in law school, Mr. Wright completed a judicial externship for the Hon. Patrick J. Walsh of the United States District Court for the Central District of California, as well as Hon. Richard J. Elrod of the Cook County Circuit Court.

He attended the University of Missouri, where he earned degrees in History and Geography and later earned his juris doctorate from the John Marshall Law School where he received the Dean’s Merit Scholarship for his academics. He is admitted to the State Bar of California, the United States District Court for the Central District of California and the United States Court of Appeal, Ninth Circuit. He resides in Los Angeles with his wife and two children.